The M2 is made of sturdy materials and features trusted Swedish quality and design that is elegant in any environment. The stand features a telescopic pole, allowing the user to adjust the height of the banner up to 225 cm (88.5 inches)! 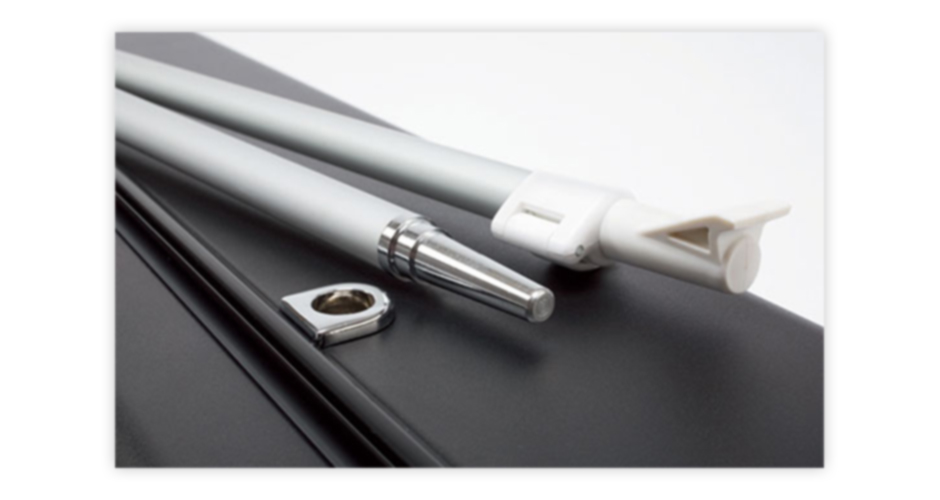 The most popular design feature of the Expand M2 is the Unique Modular Tension System. The graphic has tension when it is fully raised; however, when the banner is retracted in the display, there is no tension on the graphic. This clever system enables the cartridge to be easily removed and replaced. 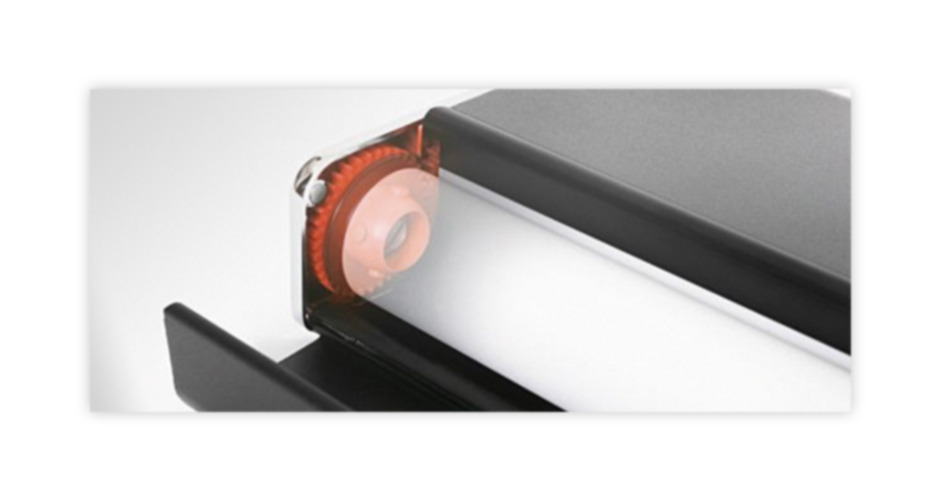 Imagine having multiple pre-printed graphics that vary in content as well as design. Then take your imagination a little further and envision being able to interchange those graphics in just a couple of minutes with absolutely no tools or heavy lifting. Have it in your mind yet? YES! You are thinking of the M2 and its ultimate function! 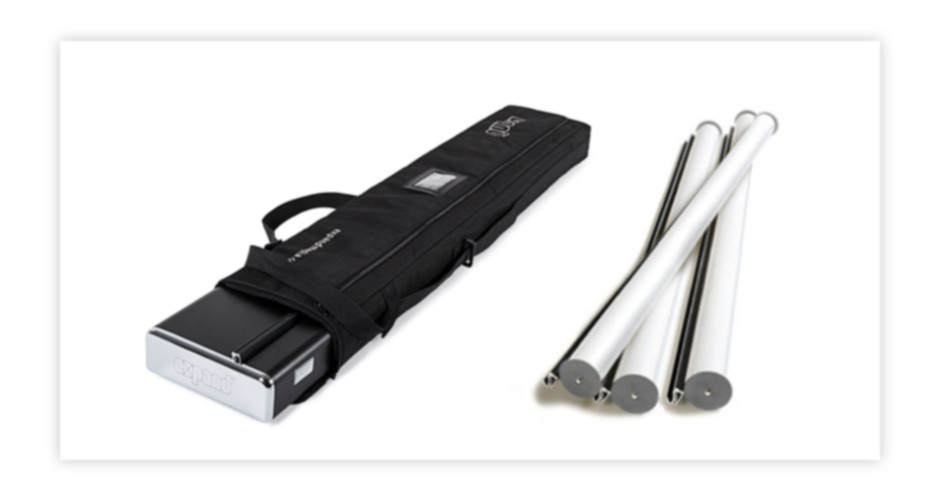 Traditional retractable banner stands cannot have their graphics changed without being sent off to a vendor for replacement. The M2’s ability to have graphics interchanged quickly, easily, and by your own hand is the main reason why this is FineLine’s go-to retractable banner.

An example of the M2s convenience can easily be seen in a tradeshow environment. A company’s booth is limited to the amount of space allotted to them, thereby limiting the space for content. With our help, our clients have found that using these M2 banners has made their shows go smoother because they have less to carry around and store. With one M2 you can have multiple cartridges with different messaging and rotate them during the tradeshow. This same idea can work for breakout sessions and multiple topics. It can even work with internal marketing within a company to promote different events! 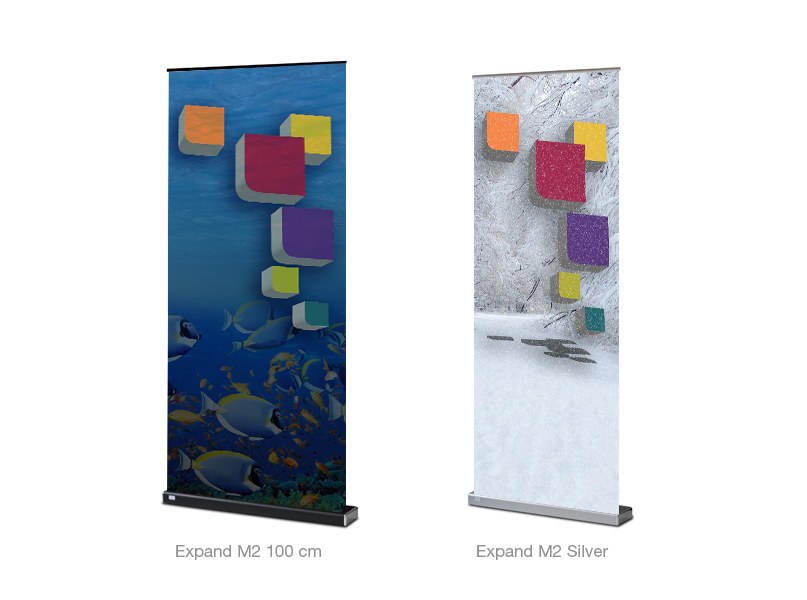 Learn how FineLine can help your next show or event be a huge success!

Not too long ago we had an incident within the fair walls of FineLine Graphics & Design. To be honest, it was nothing of import, but it did cause a bit of a stir in the office. Kate Humphrey, one of our Senior Project Managers, had a granola bar taken from her office. It was not the usual granola bar in an airtight wrapper. No, this was a granola square that was homemade with love and care. One wild theory after another was drafted by each of us, but how the granola square disappeared was simply a mystery.

Like everyone else, I tried to shed some light on the situation and in doing so I wrote an email to all detailing the marvelous and terrible story of the granola square’s demise.

It has come to my attention that there is a family of Borrowers living within the walls of our fair building. The family consists of a mother (Marta), father (Paul), son (Jimmy) and daughter (Greta). I do believe they have a pet of some kind and I am inclined to say it is a lime green caterpillar. Due to the caterpillar’s plump size the family decided to name him Lump.

Over the past few years of working at FineLine I have been able to approach and befriend this family of Borrowers. We came up with a very small treaty, which was signed by all with very small signatures. The treaty stated that we, the FineLine residents, will dutifully try not to stamp, squash, or sit on any Borrower located with the FineLine walls. In addition, we would also alert the Borrowers to any appointments set with exterminators so they might adjourn to the trees surrounding the building while the bugs or pests were eradicated. In turn, the Borrowers agreed not to steal any property of ours. They may borrow things from time-to-time, but they would return whatever it was in a timely fashion.

Now to the heart of the matter. On April 9, 2014 at approximately 2:54 pm a delicious granola square was stolen, pilfered, pinched, filched from the corner of Kate’s shelf. She noticed it was missing the next morning, April 10, 2014, as she sat down at her desk, preparing to enjoy her morning coffee and anticipating the enjoyment with which she would savor the sweet taste of the granola square she had saved. Imagine her disdain as she found her coveted breakfast snack had gone missing. She sent out an email lamenting the loss of such a scrumptious cube of granola delight, demanding to know who the vile thief was. To her dismay and bewilderment, all FineLine employees, myself included, vehemently denied the accusation that we had gobbled up the tasty morsel.

To be honest, this stymied me as well. So immediately I took it upon myself to investigate this horrible crime of passion and hunger. I searched the office high and low and then set about searching it low and high. I used a magnifying glass, binoculars, telescope, electron microscope, and then lastly I looked through an empty glass coke bottle at every minute detail. However, my efforts were to no avail. My degree in Gumshoery, that I received in the fourth grade, had not aided me at all.

Just when I was about to give up my search and put this particular case into cold storage, my eye alighted on a series of caterpillar tracks, barely visible, on the wall right outside of Kate’s office. Using a mixture of plaster and water I made liquid plaster, which I poured into each caterpillar track. Once the plaster was dried I removed each mold. Using the molds I recreated a 3D rendering of the caterpillar’s feet.

As I was viewing the 3D rendering, a light went off above my head as Pam turned on the light in my office. Then I had an amazing breakthrough. The Borrowers had a lime green caterpillar named Lump. And he was predisposed to indulging too often in delectable foods. Without hesitation, I banged on the walls until Paul, the father of the Borrower family, emerged. I presented him with my findings and told him about the conclusions I had drawn based on the efforts of my intellect. In the end he confessed, that his lime green caterpillar, Lump, had shamefully eaten the granola square.

There you have it everyone. The culprit is none other than Lump. No charges have been brought up against the plump lime green guy. The embarrassment could be plainly seen on his tiny little face. He looked so sad and pathetic that I decided his thievery should not come to light. Instead, with the aid of Freddie (one of my conspiratorial co-workers), we spun a riveting story about how Dillon, a young golden retriever whose family (Steve & Patty) works here, had bound into Kate’s office and vacuumed up the granola square.

To both our delight, the story was received well by everyone and Lump lived on to become a beautiful butterfly that was later eaten by a bird.

I admit there may be some holes in my theory, but I stand by it. At the very least, I concocted a captivating story that may provide a laugh or a guffaw for the reader.

If there is something to take away, it is that we at FineLine are a group of creative individuals. And our creativity extends far beyond design!

I came across an article the other day in Connect Magazine and was introduced to Siloing or Silos. I am familiar with silos in their most general sense, a structure used for storing bulk materials (grain, coal, cement, woodchips etc.). However, in this article the word Silos referred to something quite different.

Within the world of business, Silos is “a corporate word for non-communication and incompatible goal-setting between departments.” states Manny Hernandez in Connect Magazine. This non-communication results in one department within an organization operating without regard for what others are doing. In very simple terms, they are only looking out for themselves. The end result can have devastating effects on the company ranging from reduced productivity to having good people leave the ranks.

The article “Siloing” recommended six ways to quash the silo mentality that I thought would be pertinent to any business or organization. They are summed up below:

What struck me about this article was that these six ideas seem to be, or at least should be, intuitive. When you work for a company, the main focus should be what’s best for the company. If the company thrives so will everyone that works within it.

The same goes for clients. My end goal at FineLine Graphics & Design is to always provide the best solution, product, or design for the client. I don’t strike out on my own to solve a design issue. I collaborate with my manager, production artist, designers and the client to come up with the best possible solution for the design. When the client is happy with the design we all benefit from it as a whole.

Ultimately the sum of the parts makes the whole. We can accomplish more by collaborating and working together than by working on our own.

At the start of the new year we decided that our website was in need of an update. With the proliferation of smartphones and tablets it became apparent that our site was not living up to its full capacity. When our site was viewed via desktop or laptop computer it worked perfectly, but the same could not be said when viewed on a smartphone or tablet. Text was woefully small and difficult to read and our projects were not displaying to their full potential.

We drew up a series of criteria that our new site must include.

These four criteria guided the design and creation of our new website. The end result can be viewed at www.finelinegd.com. Here’s a quick preview of some improvements we made.

When visiting our site, you will be greeted by our “Projects” page displaying a scrolling slide bar with inspirational quotations. Just below the slide bar you’re able to select projects by category. If you’d like to see samples of trade shows and events you simply select it from the list and multiple thumbnails of our trade shows and events will present themselves.

Once you select a specific project, you will be taken to the “Project Post” page where you will see your chosen project in its entirety. If you scroll to the bottom you can like it on Facebook, Tweet about it, or share it on LinkedIn. Additionally, you’re not required to navigate back to the Projects page. Each Project Post page offers similar projects that can be viewed. It’s easy to move forward or backwards through the category by using the supplied arrows.

Our blog will contain more detailed information about specific projects, musings about design, print and web related media, and much more.

The contact page features a map with our current location and a contact form for people to send us a quick message with ease.

We hope you enjoy the new look and design of the website!