ISTE 2015 accomplished two main objectives for Aerohive: first, the show was a platform for Aerohive to incorporate their new look and feel into a trade show environment, and second, it gave them the opportunity to unveil their new wi-fi solution, HiveSchool, for K-12 and higher education.

Aerohive’s new look leveraged the honeycomb shape of their logo, using it as a super graphic to add depth as a background element as well as a container for content.

Their new style of imagery provides the viewer with a bird’s-eye view of the subject. Aerohive’s routers are installed on the ceiling and other high vantage points to offer the widest range of wi-fi coverage. All the new imagery is from the point-of-view of Aerohive’s routers. Not only does this add an interesting perspective to their imagery which is not often seen, it gives Aerohive a unique and memorable look.

HiveSchool is a simple, scalable, and secure wi-fi solution which supports the mobile-first classroom and helps teachers use modern classroom technologies. To draw attendees into their booth at ISTE 2015, we worked with Aerohive to create a 15’ by 6’ mural depicting the different areas that HiveSchool benefits for K-12 and higher education. As attendees visited the booth they were invited to color, draw, or add their own quotes and ideas to the mural. The ultimate purpose of the mural was to engage, connect, and inspire attendees, which aligns directly with Aerohive’s main messaging. 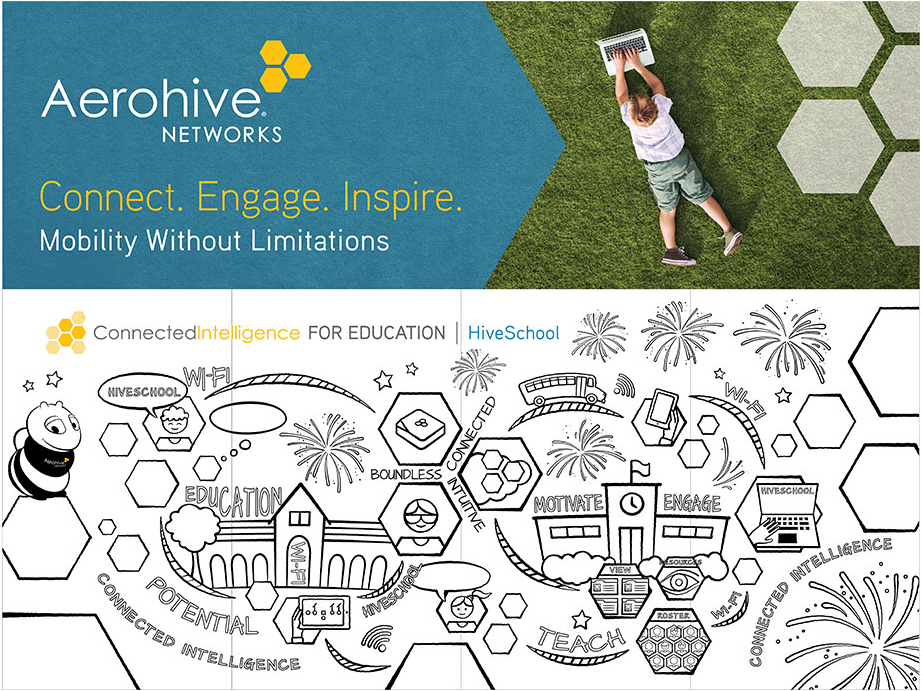 The mural wall was a key feature for Aerohive at ISTE 2015 to draw (pun intended) attendees into the booth.